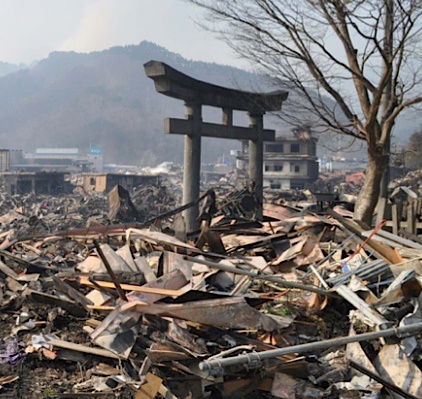 The Tōhoku Earthquake And Tsunami

Excerpt From Walking Back From Key West . . .

Tim fumed as he stood in line for the waffle iron.  The day was barely started and it was already out of control.  Mark and Dale had already plotted out the whole day; unthinkable!  How had he missed this?  When did all of this happen?

“. . . then I rolled down the pier and the twat knocked my sunglasses off,” a familiar voice announced.

“Did you get them back?” Roger asked.

Tim turned to see the group of students from the previous night.   The tall blond one was wearing dark glasses, appeared to be hung over and was clearly pleased with himself.

“No.  They landed in the water,” Spence laughed.

Tim saw the girls out of the corner of his eye and found he still didn’t know their names.

Kate hung on Darla. Like Spence, Kate was wrecked and resenting everything.

“Well, I turned to him and said…”Spence continued.

“Shhhh!” Jane hissed and turned up the sound on the large television that dominated the hotel’s breakfast room. END_OF_DOCUMENT_TOKEN_TO_BE_REPLACED